Here’s the second part of collaborating author Simon Bradley’s account of what it took to get the book ‘Brian May’s Red Special: The Story of the Home-Made Guitar That Rocked Queen and the World’ to the shelves.

In this episode he describes the planning process of the book’s detailed content, from an embryonic chapter list to wrestling with the reams of raw material. He also gives an insight on what it took to meticulously plan, schedule and ultimately conduct a marathon interview with Brian from which the heart of the book’s content would emerge.

How would it all go down? Read on…

Pictures is Easy; Words is Hard…

The book was always going to be written in the first person. In fact, that was the first thing I wrote in my little planning notebook when I began to grapple with the whole concept. I didn’t think anyone wanted to hear anything from me, but would much prefer reading about the guitar as if Brian was telling the tale himself. As it turned out much later, Brian wouldn’t agree, but we’ll get to that.

For now, I knew that I’d need a hefty chunk of Brian’s time in order to obtain all the detail required for such a focussed book, but arranging an interview with his office was still a way down the line. First I needed a plan, and the way to tackle that, irrespective of subject, is to come up with a chapter list. I knew that we’d need to talk about his childhood, so that was one chapter; how the guitar was conceived and designed would comprise another; and how it was actually built, a third. Brian had informed us that he specifically wanted his personal account of the performance atop Buckingham Palace in there too, and there were other areas we also needed to visit. In short, I came up with six chapters, each with a clever title (‘Father To Son’ was a shoo-in; others took more time to concoct) and a short synopsis and, once this framework had been approved by my publisher and all the rather dirty money stuff had been worked out, I began working on the interview itself. It was down to me to put flesh on dem bones.

Here I was on familiar ground. I’ve interviewed many guitarists of varying levels of fame during my time with Guitarist magazine and have consequently learned that, for me, there are two basic methods of obtaining the perfect interview. If you’re a journalism graduate (and I am a world of not), you’re taught to come up with a concept, break it down into no more than four bulletpoints, divide the number of available pages by the amount of time you have with said icon, calculate the square root and that’s the number of questions you need to come up with (this might be a lie). As a guitarist who sort of fell into writing for a living back in 1993, however, I’ve always employed the rather more mundane yet no less effective Coloured Pen Approach™ and did so now. I assigned each chapter its own hue, worked out what I wanted to cover and came up with questions accordingly, denoting their relevance to a specific chapter with the aforementioned method. Simples. That colour-blotted, Arnold Rimmer-like plan became my template for the entire writing process (well, until the editing scimitars got to work…). 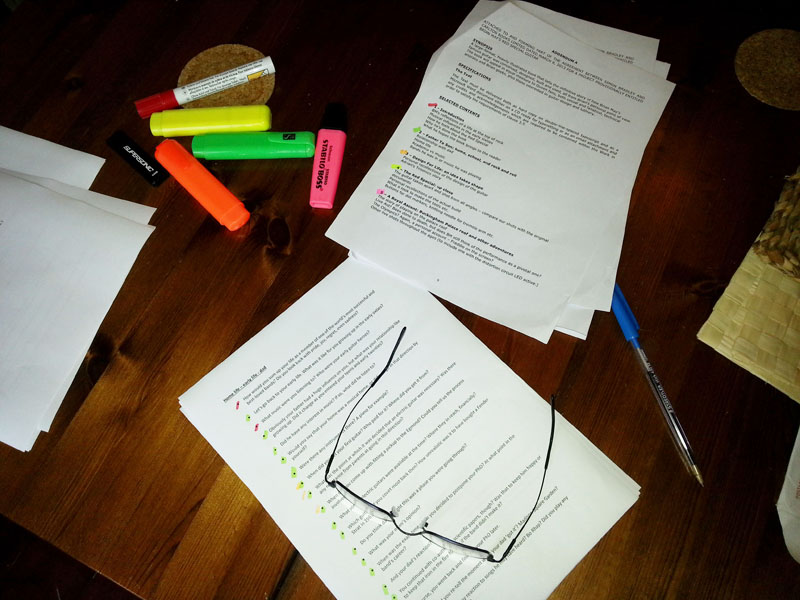 The Coloured Pen Approach in all its glory
Pic © S Bradley

One thing you don’t do is sit there in front of Brian May (or anyone else, come to that) and just make it up as you go along. I learned the questions and, more importantly, their order, virtually by rote and planned the interview to such an extent that, if Brian answered a particular enquiry one way, I knew how to get him back to the core of the grilling by nudging him with a specific question. I was aware that speaking in intimate detail about his parents and childhood, let alone the guitar and Queen, would be a draining experience for Brian. ‘Don’t cock it up’ was the unspoken advice, and I didn’t intend to.

After a couple of scheduling clashes, the interview was confirmed for a hot summer’s day in August 2013 at Brian’s Surrey offices. I had him for ‘the whole afternoon’, which, considering he’s busier than ever these days, was a real bonus. 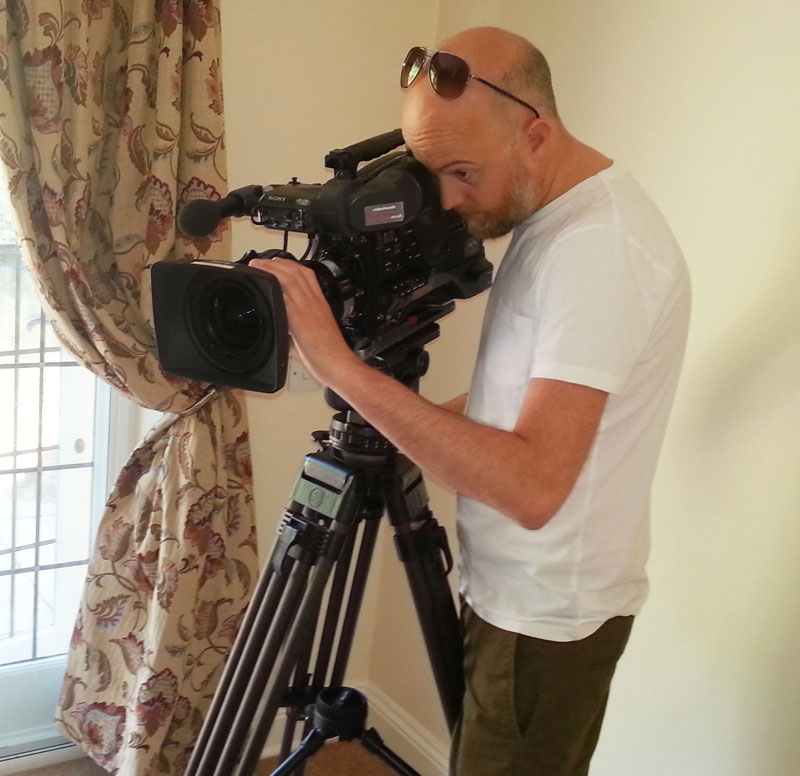 One of two cameras used for the shoot
Pic © S Bradley

I’ve interviewed Brian several times since 1998, so I’d assumed/hoped that the afternoon would follow the established pattern: we’d sit somewhere quiet on a couple of comfy chairs, both of us nursing cups of tea, I’d press ‘record’ on my digital recording thingy, and just chat. Well, not so fast. Others had taken advantage of Brian’s availability and it had been decided that the interview would also be filmed for use in the digital domain in due course. Now, this didn’t concern me at all – in fact, I relished the additional pressure – but it would unavoidably alter the vibe of the afternoon. 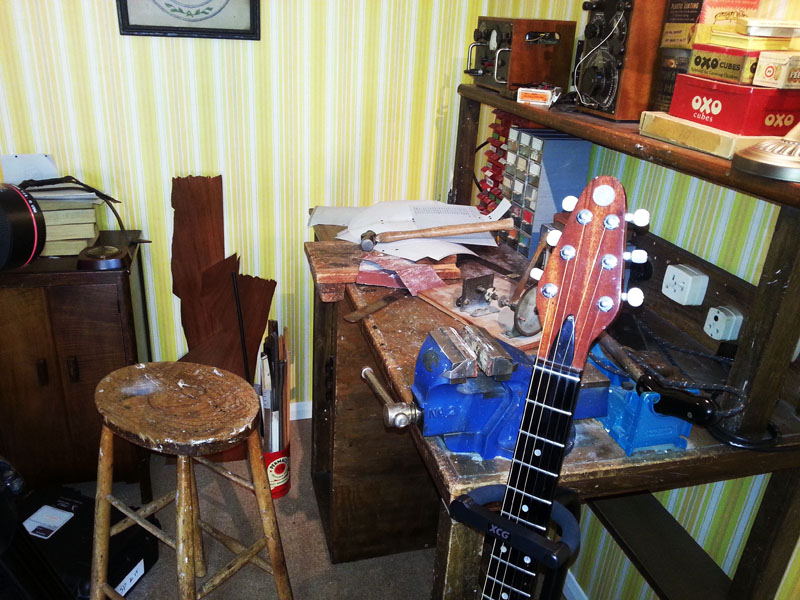 Pete had built a set into the corner of a small and rather cramped room and had found the actual bench that Harold May had had in his workshop… the one upon which the Red Special had been built. He’d also unearthed a number of the original radio sets, materials and tools; a fly on the wall would have buzzily laughed to itself at the sight of a number of grown men, myself absolutely included, cooing at what was the original tin of Rustins clear coating. Read the book to discover the full enormity of this but, in the realm of serious Brian May fandom, this is a relic of almost mythic proportions. 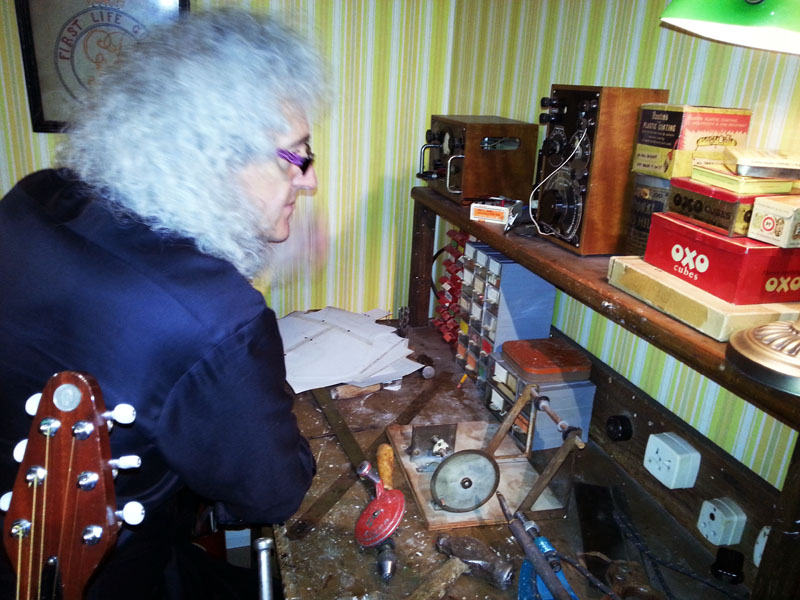 Brian checks out the radio sets built by his dad that he’d not seen for a while. A deep moment. The original tin of Rustins can be seen just to the right of the taller radio
Pic © S Bradley

Brian dutifully appeared at the appointed time and spent a couple of private minutes examining the display that, to him, must have resembled a May family museum; can’t have been easy. The Red Special was jauntily set front and centre of the two-camera shoot, and Pete had brought Brian’s first ever guitar, his Egmond acoustic, from the warehouse just in case. Brian grabbed and tuned it while we set up. 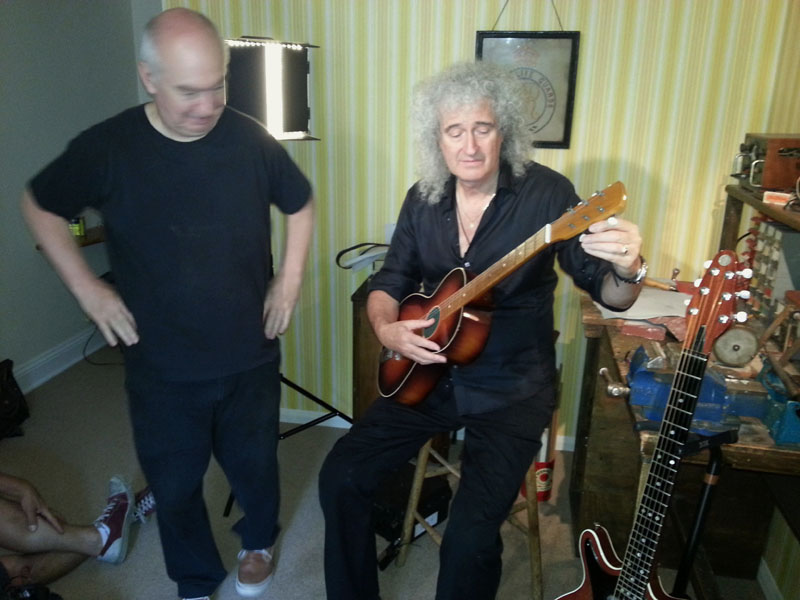 We got underway just after 2pm and it was hot in that room, really hot, with lights, burly blokes and a temperature outside of over 80 degrees all adding to the sapping, sticky atmosphere. Brian and I, perched on stools opposite each other, got down to business and he seemed to really get into the interview after a rather stilted start (in hindsight, my first question really shouldn’t have been about Queen…). Aside from occasional requests from the director to repeat a phrase or two thanks to the rumble from Heathrow-bound planes overhead it went pretty smoothly, as working with pros usually does.

After about 3½ hours we were all flagging, so I wound proceedings up with only a couple of questions to go (I filled in the gaps over the phone with Brian about a month later). The film crew were great (watch this space for more on that) and, with only one small issue with the audio, which was solved in seconds, to throw a spanner in the works I felt we’d all done a great job. Brian thought so too, and, still with a smile on his face, shook hands all round before he was whisked away to his next appointment.

Now all I had to do was transcribe the whole thing and beat it into some kind of cogent order.

The pictures used on this blog are either mine or used with the permission of the copyright owner. If you feel you have to take and use them elsewhere, a credit would be nice and presumably you’ll be buying the book, yeah? Thank you!

In the next instalment, coming soon, Simon describes the exhaustive process of putting the plans into place, knuckling down to produce a number of drafts and ultimately getting the book written. Then, the vital editing process begins and, all being well, final approval from Brian himself…

« Behind The Scenes: Part One
Brian May’s Red Special Reviewed in Total Guitar »