We’ve been very fortunate to have been able to grab a few minutes with Dave Colquhoun, a Cumbrian guitarist who was one of the music coaches on the recent Oscar-winning Freddie biopic Bohemian Rhapsody, aiding Gwilym Lee and, more extensively, Rami Malik in mimicing the guitar styles of Brian and Freddie.

He’s toured and worked with many bands and musicians since winning Guitarist magazine’s Guitarist of the Year shindig in 1994, and has also gone on to become an established teacher. Currently he’s guitarist in Rick Wakeman’s English Rock Ensemble and lives in the South East. 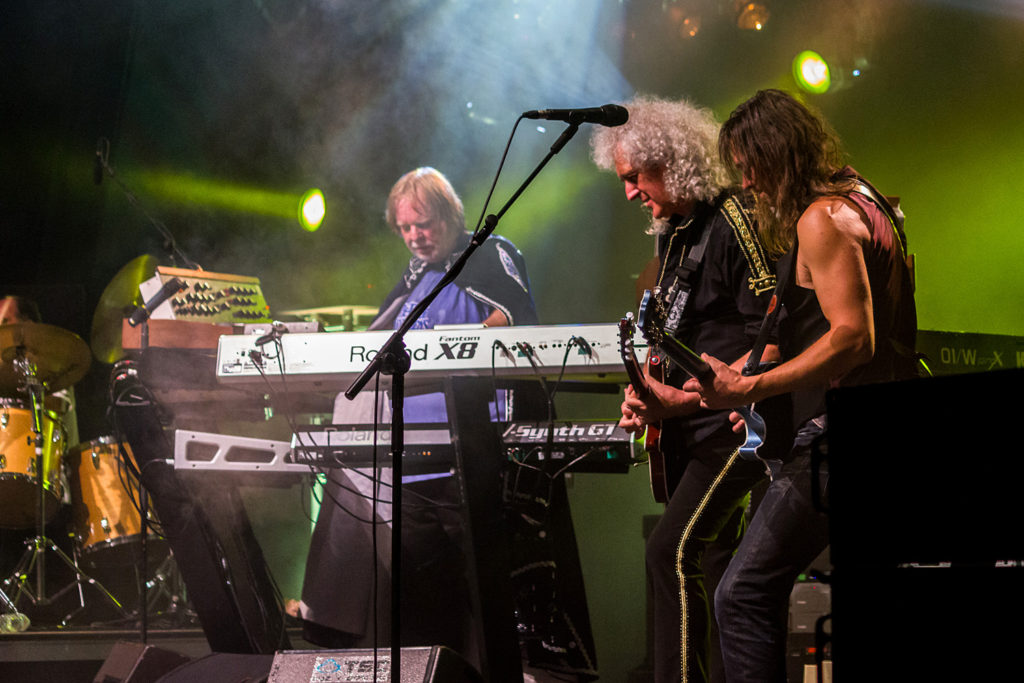 SB: When did you first meet Brian?

Dave Colquhoun: It would have been when he guested with Wakeman at 2015’s Starmus Festival in Tenerife. I’m into running, and I’d gone for a run the day before and sprained my ankle. Turns out I’d actually broken it and, as is the way of things, pretty much everyone took the mickey out of me. Brian was the only one who gave me any sympathy and, from there, he started taking an interest in my playing. He’d ask me technical questions and it was a bit surreal. I got a get well soon card from Brian and Anita too, which was so nice of them.

SB: So how did you get involved with the film?

DC: Brian asked me to do a gig with him and Kerry Ellis for Radio 2, the Michael Ball show, in 2017, which went well, and we just kept in touch. Moving on from that I got a bizarre call from Becky Bentham, who was the Music Supervisor on the film, asking me if I was available the following week to come down and do this thing. I didn’t even know that the movie had been commissioned and I didn’t really understand what it was they wanted me to do. I had to send some pictures for the body doubling; whether I’d fit into the costumes was the main issue. I filmed a couple of solos because they were interested in hand-shape, that sort of thing, too. Yeah, so that was on the Saturday and the day after I was on-set for the Live Aid thing, sitting around in a wig! 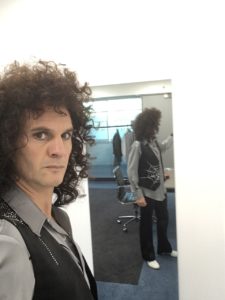 Dave with Brian in the background. Or is it… wait… wha’? Fun on-set… Image (c) Dave Colquhoun

SB: What was your role on the film?

DC: Gwilym would have been doing guitar lessons for six months by that point and he just about had it down, although I did coach him for the Smile gig section, Freddie’s first gig. I was brought in as a double, so it was full-costume fittings, although I didn’t know whether I was actually going to be used, but I did continue to check in with Gwil and offer him moral support and approval. 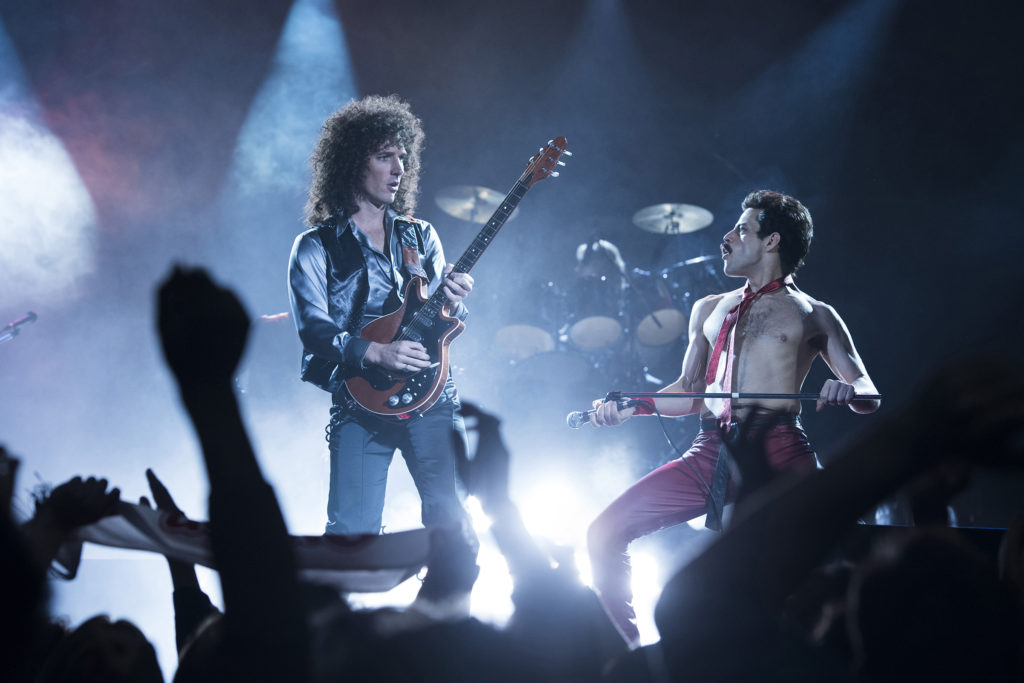 DC: Nobody really knew what the director would be looking for, although I think in hindsight he wasn’t really that interested in the guitar thing. I think the actors really wanted to do it all themselves, for obvious reasons, and Gwilym had done so much work to get to the level he got it to. After about seven days it became apparent that I wasn’t going to be used for anything much!

DC: Anyway, there was Live Aid and all these other different locations; basically all the music stuff moved around. I did the Rockfield stuff and the scenes at LH2, pretty much everything, but… I used to get in at 6 o’clock in the morning, get made up and into the outfit, and then you’d just sit there for twelve hours until it was time to get de-wigged! After a few days I thought ‘I’ve got to do something about this’, so I started to bring in my guitar, and I sat in my trailer and just wore the frets out! 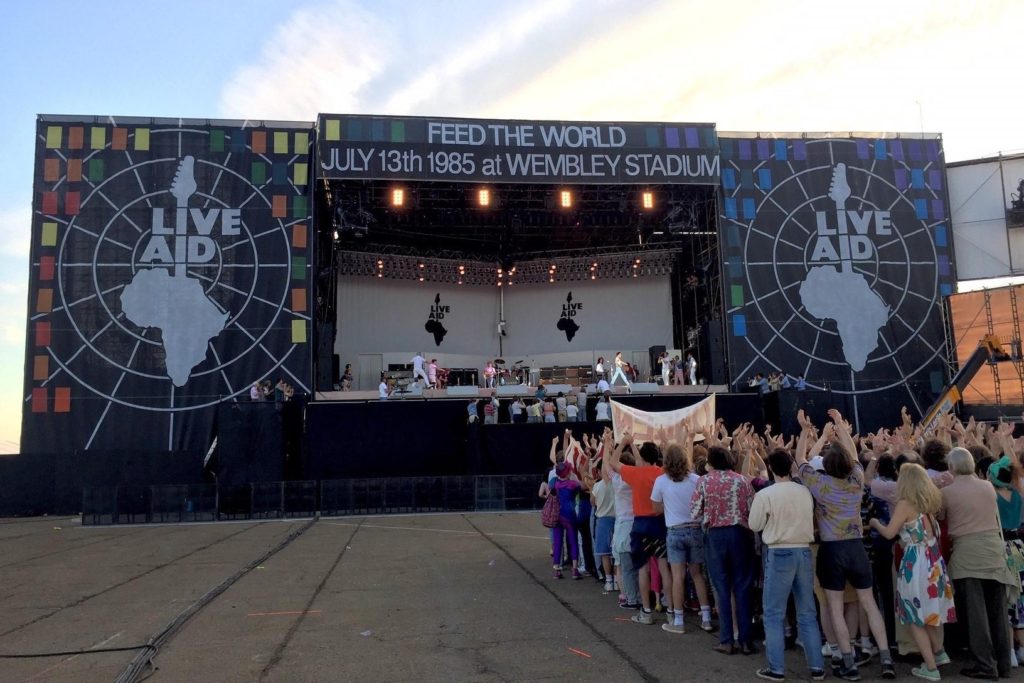 SB: Then the director reportedly left…

DC: Yes, then there was the big director change and a couple of things got cancelled. I didn’t know what was going on; I read in the press that things had gone a bit belly-up. I mean, I think they might have even ceased filming for a while. Then I got another call from Becky…

SB: That was to work with Rami, right?

DC: Rami, yeah. I mean I’d seen him on set and everything but it’s all a bit intense; there’s a bit of a hierarchy and you keep yourself out of the way, so I’d never really spoken to him. They were shooting the scene where they were writing Crazy Little Thing Called Love, a ‘Freddie in the bath tub’ kind of vibe, and I was asked to teach him how to play it. He’d never played guitar and he didn’t have a lot of time… when you get to that B-flat chord, you can’t really do that in a couple of weeks. So I had this idea that if they were writing it, it would be a kind of framework so why didn’t we just do a one-chord strum version of it. So they filmed me doing that and they thought that approach was great. Then they got Marc Martel to basically recreate that by singing it kind of half-written with a few wrong lyrics, and I had to teach Rami to play that version of it.

DC: We did loads of sessions over the course of seven or eight days just breaking it down and it was so hard for him because he was also doing piano stuff and all the filming – he was absolutely burnt to a crisp. He stuck with it and we became quite close – it’s quite an intimate thing, all that! – and we did the shoot and he did brilliantly. I basically played the guitar along with what he was playing just to give him the timing of it, which was really strange because he was in a gold, diamond-encrusted bathrobe, of course. And, because I would have been reflected in the bath tub, I had to stand on the toilet on one leg with the guitar right up in the air, and look over my shoulder to see when he was going to strum the chords. And that was, like, for four hours!

SB: But… that scene’s missing from the final cut!

DC: It was a great scene and they were really into it but I think because CLTCL had been used a couple of other times it didn’t make the final cut. I’m sure it’ll come out on a boxset or something. But yeah, Rami was really pleased with it and I think he was disappointed that it didn’t make it. 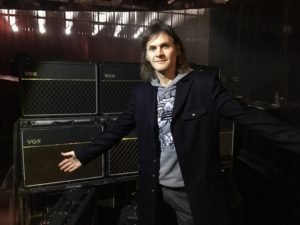