Here’s part three of collaborating author Simon Bradley’s account of what it took to get the book ‘Brian May’s Red Special: The Story of the Home-Made Guitar That Rocked Queen and the World’ to the shelves.

This time it’s all about the writing process, what it took to put numerous drafts together from the raw material obtained during the interview as described in Part Two and how they were refined. There’s also the tale how some dark days were ultimately rescued by Brian himself.

The story also contains some astronomy…

I really enjoy the entire process of writing. I always have, and the vast majority of my scribbling career has been spent producing factual copy, mostly for guitar publications. Conversely I have very little experience in the fictional domain, spinning original yarns from my own head: making up silly stories for my friend’s daughter Maisie is about the size of it. In fact her mum is an established writer of fiction and the stress she goes through to produce what are eminently readable and enjoyable novels goes beyond what most normal people could ever cope with. When an author talks about ‘being at one with the characters’ and ‘dying for the story’ they’re not being overly precious, believe me. And writer’s block? It’s real and it sucks. Having stared at a mockingly pitiless computer screen more times than I can remember, desperately searching for just the right adjectives to describe, yet again, the sound a Gibson Les Paul makes, I know that only too well.

The Red Special book offered, on the face of it at least, a much more straightforward journey and although the road ahead would turn out to be as bumpy as that travelled by many a fiction writer, I knew exactly what I had to do to at least set out.

The long interview with Brian was done and the 147 minutes of raw audio material we had recorded during it were spread over 10 audio files that sat in my ‘To Do’ folder, innocently awaiting that most tedious of tasks: transcription.

In the Good Old Days™ on Guitarist, we’d use a transcription machine. You’d pop in the cassette upon which you’d recorded the interview into said contraption, don a set of headphones and – this is the clever part – use a foot pedal to play and rewind the tape, leaving both hands free to clatter away at the keyboard. If you set the playback to just the right speed, you could type at the same velocity at which the interviewee was speaking and you’d be done in short order.

Oh, and use a professional transcription service? Well, I’m sure there are plenty of good ones out there, but the three we’ve had experience with on Guitarist were all terrible. ‘DVD King’, ‘Eric Clacton’ and ‘Washbasin Guitars’, rather than ‘BB King’, ‘Eric Clapton’ and ‘Washburn Guitars’, are just a trio of comedy transcription errors made. I just couldn’t be doing with that: Tie Your Brother Clown just wouldn’t suffice.

Digital technology has dispensed with such clunky and cobweb–festooned practices in favour of the altogether more ‘convenient’ method of recording an interview into any number of audio formats; .wavs, .aiffs, .wtfs and, if you’re lucky, .mp3s. By the way, one of those formats is made up… 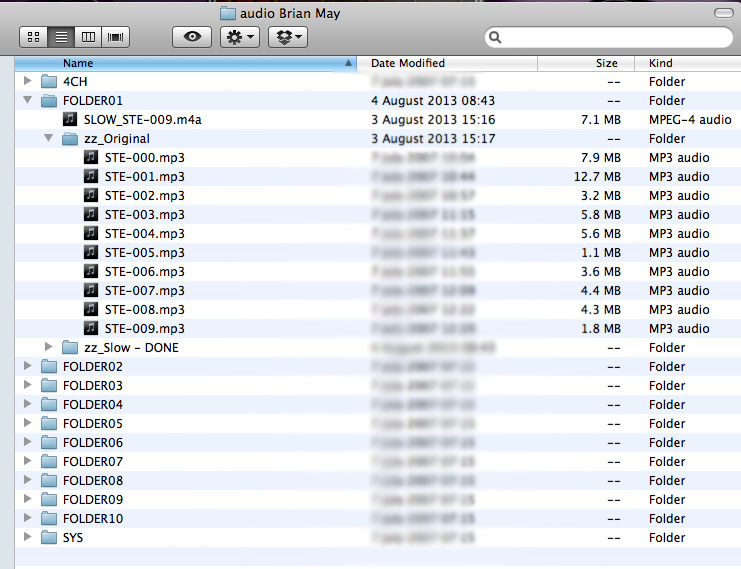 My digital recording thingy spits out .wavs so I spent the first weekend of what I call, in hindsight, the Transcription Purgatory Death Smash, converting them into a format my MacBook could deal with without pulling a tantrum. I slowed them down in good old Garage Band and cleaned them up and boosted their levels as I went and, from there it was simply a case of, well, transcribing them. It was also here that extra care needed to be taken.

Accuracy is paramount regardless of the interviewee in question. I’m not a tabloid journo, neither am I paparazzi: I strive for making any transcription as close as possible to what was actually said. I knew I had to be able to check what I’d written at any given time when anyone – the publishers, my editor, Brian – asked, and I couldn’t afford to be caught out paraphrasing, adding embellishments or missing what could turn out to be a vital piece of detail.

Those 10 .mp3s took a five-night week, plus an entire weekend, to get done, followed by two complete listen-throughs to ensure what I’d got on paper was exactly what Brian had said. Each was also peppered with time-markers, just in case a quick fact-checking referral was required. I didn’t fancy trawling through the audio to find exactly where Brian had talked about a particular part of the guitar’s construction process to check anything, and the marker system has held me in good stead ever since. ‘Where does Brian talk about Dave Dilloway?’ asked one of Brian’s team months after I’d submitted a draft. 5m 03s in to ‘Brian_2.mp3’, I think you’ll find. 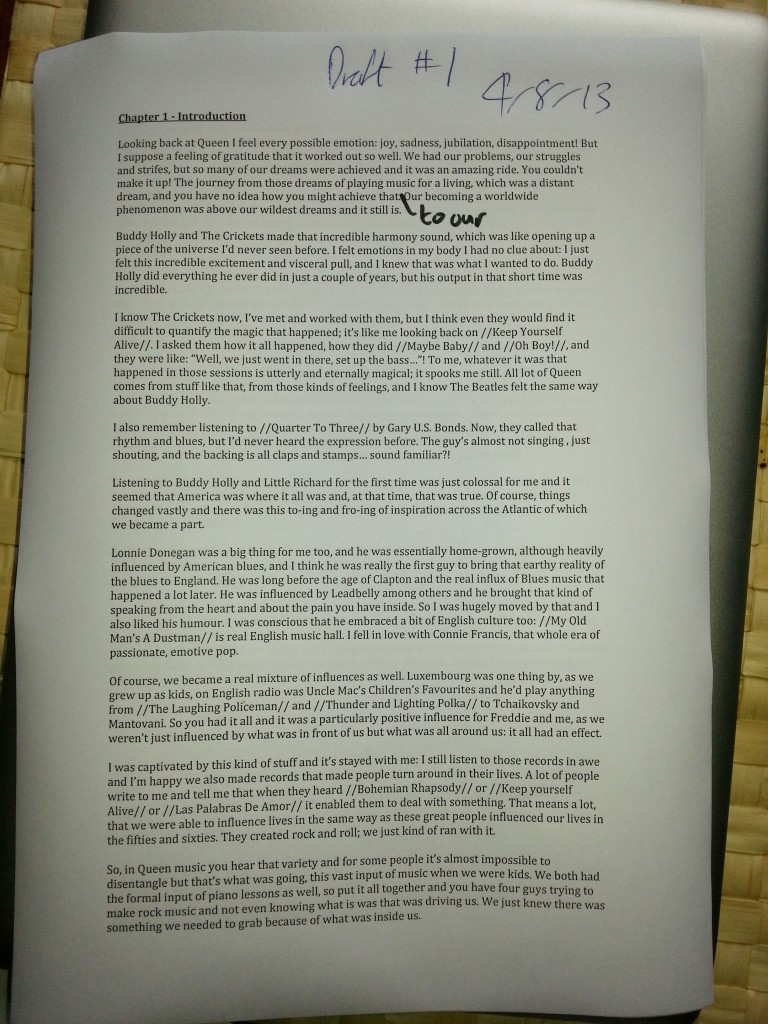 The first draft. A long way to go yet
Pic (c) S Bradley

Putting a first draft together was actually the easy part. The interview had been planned to fit into a chapter list and it was just question of putting square-shaped lumps of copy into their sibling chapter holes. I say easy; it took another two weeks, but as each chapter began to take shape, metaphorically blinking in the light of a new dawn, I began to realise that this was going to be a hell of a book.

Brian had given me his story of the Buckingham Palace Roof performance, all 6,178 words of it, over 18 months previously and I’d had it subbed and styled soon afterwards. After producing, I think, seven drafts and revamping, rewriting and re-evaluating every single word many times over the course of a few weeks, a first final draft was ready to go. My editor and I, with positive input from several others, had refined and expanded the chapter list (although some of those first chapters bear little resemblance to those that reside in the finished book), and I submitted an official first final draft on 23rd August 2013. 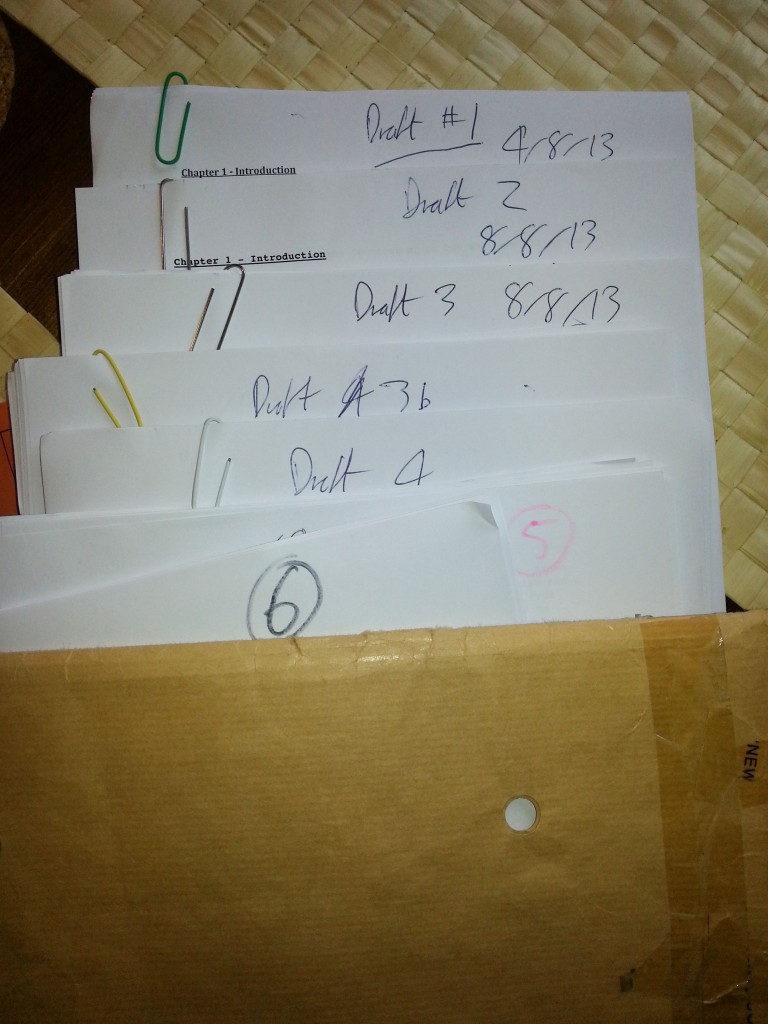 Pete Malandrone read it and loved it, and my editor Roland, who’s been a rock throughout this whole process, was also positive. The one person who wasn’t especially impressed was the most important: Brian. He didn’t understand why it was written in the first person, what the book was trying to achieve and how it all linked together. In short, he didn’t get it and told me so in no uncertain terms. 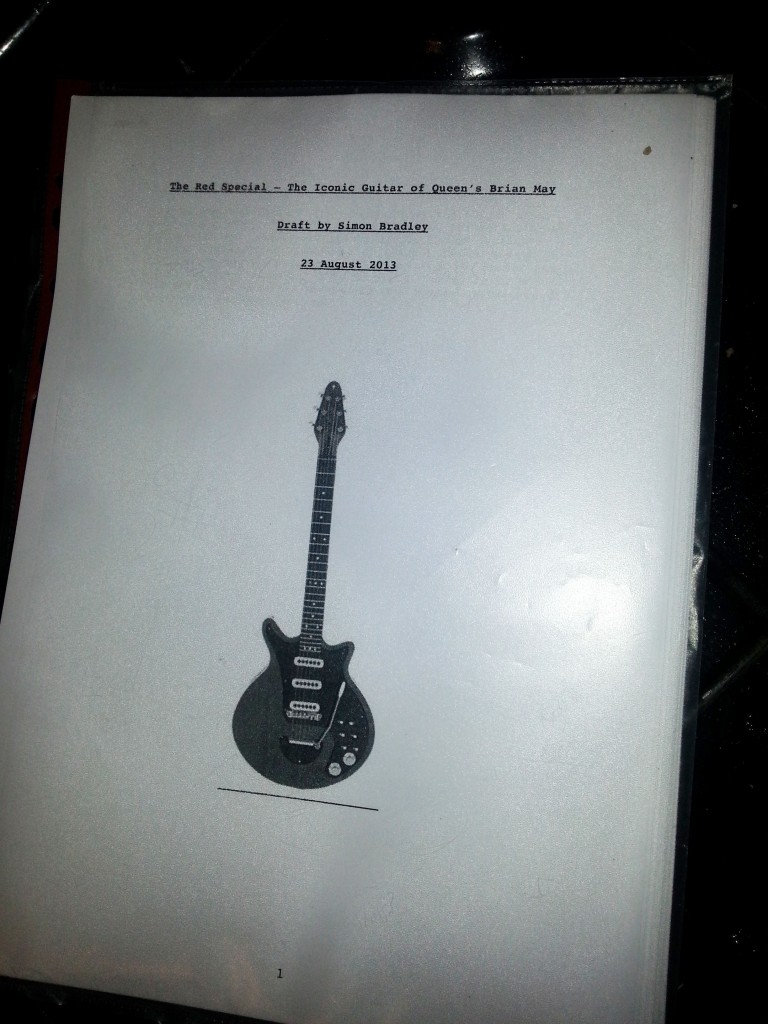 There it is. Brian? Not yet a fan… Note the book’s original working title
Pic (c) S Bradley

Right… Needless to say, I was gutted. I’d hoped that he would have been as enthused by the book as others had been, but, in hindsight, it’s this dedication to absolute perfection that’s made him what he is. Think the solo to Bohemian Rhapsody was just thrown down in one afternoon? Certainly not and he’s never been prepared to let anything go until he’s wholly happy with it, be it that wonderful piece of music or a book dedicated to the instrument on which it was played. What’s more, it’s his name on the cover, so it’s absolutely his right to voice reservations, and it was now up to me to look at the book again and make it something he could get behind.

Luckily, chance stepped in. A planned trip to the Roque de los Muchachos Observatory in the Canaries had fallen through, and Brian had some unexpected free time. Why didn’t I come down to the house and we could discuss our – well, my – options? ‘Great idea!’ I said and, less than two weeks later, I found myself in Brian’s office, surrounded by my papers and both of us tapping away at our laptops, brainstorming new chapter concepts and an improved approach that we could both subscribe to.

Four hours later, I had a new plan and we were off and running again. Brian’s input had been invaluable and I’d never have thought of some of the things he suggested. One was to have the book’s introduction written by me and another was to have short intros to each chapter, but all made the book better, much better. That’s world experience for you.

In amongst all this high industry was a very personal moment, one that I look back on as fondly as any other I’ve experienced, at least professionally. Brian was still getting back on his feet – literally – after knee surgery and every hour he’d get up and move around, just to keep himself from getting too sore. He suggested that we go outside to get some air (cerebrally jousting with a man of Brian’s intellect is, for someone who just scraped CSE Maths, an exhausting process and it was hot in that room, so I gratefully agreed) and, as it was about 5pm by this point, it was getting dark. Ever the astronomer, he spotted a bright object in the evening sky and went back inside to grab his telescope, one, ironically, he’d built with his dad prior to tackling the Red Special… 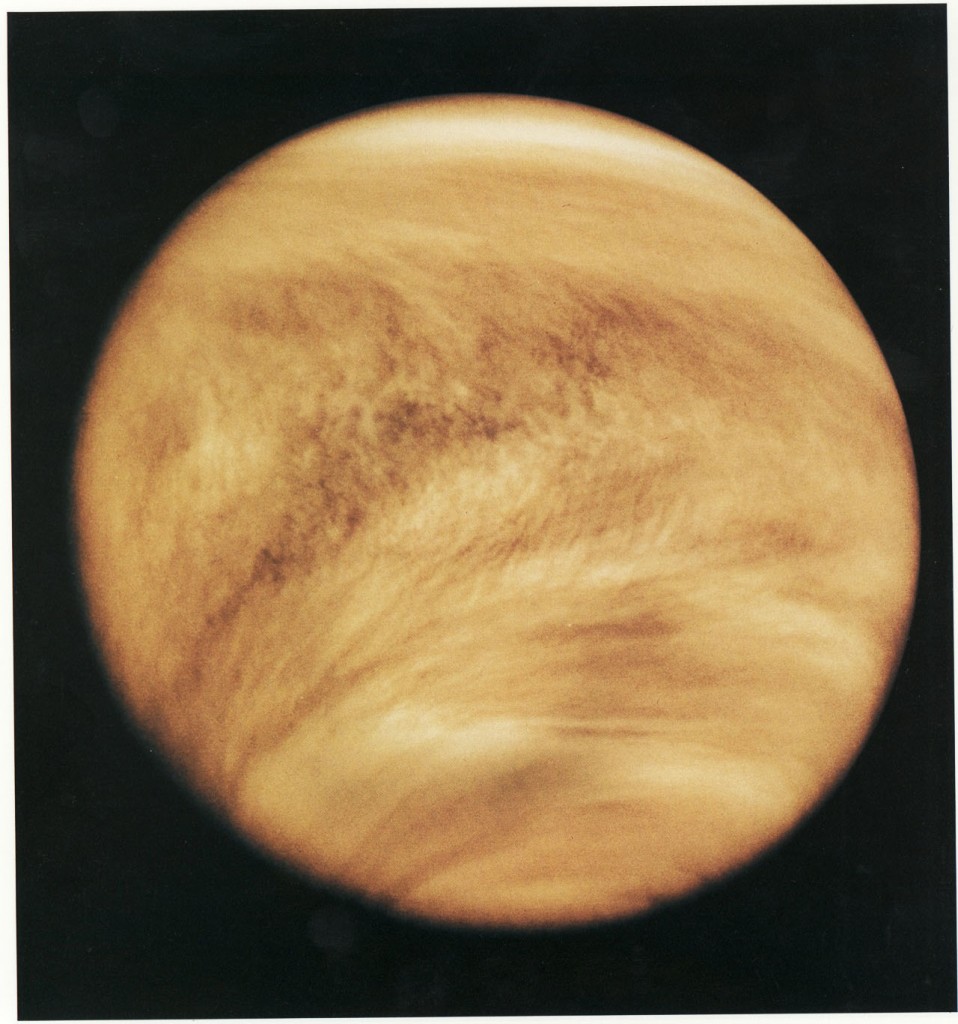 Now, I’d glibly assumed that the light was a 747 coming in to Heathrow, but no; turns out it was the planet Venus. So, I’m peering though the viewpiece of Brian’s childhood, home-made telescope while he enthusiastically tells me various factoids about the planet, its orbit, its position in the sky at various times of the year, all the good stuff. Me, doing astronomy with Dr Brian May, looking at Venus an’ all. That’s one to tell the grandkids about.

Anyway, I finally submitted the officially-approved final draft to Carlton Books in February 2014: layouts and the assigning of pictures were next. It was all coming together, but would Brian like it?

The pictures used on this blog are either mine or used with the permission of the copyright owner. If you feel you have to take and use them elsewhere, a credit would be nice and presumably you’ve bought a copy of the book, yeah?

Next time, the inside story of what it took to take the Red Special apart, photograph her in minute detail and, most importantly of all, put her back together again.
« Brian May’s Red Special Reviewed in Total Guitar
Behind The Scenes: Picture Special »